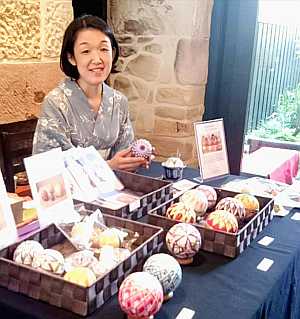 Chihiro was born and raised in Tokyo Japan and has been living in Sydney since 2001. She studied oil painting at Fine Arts High School and Broadcasting Arts College in Tokyo.

Since she was a child Temari was always part of her life as her maternal grandmother had been making this intricate Japanese craft for over 30 years, until just few years before her passing at 98. Chihiro had been watching her grandmother’s Temari making work for decades but unfortunately she didn’t have a chance to learn from grandmother.

However, she started that craft here in Sydney learning from Japanese Temari books. Chihiro said it has been very challenging but somehow she felt she has special “Temari making DNA” from her grandmother.

Chihiro loves using traditional patterns with countless possible colour combinations. She is also a Reiki Master and thinks some of Temari patterns are very similar to Mandala patterns and maybe that is one of the reasons she feels like meditating while making Temari.